Whether I’d like to believe it or not, this academic year is nearly finished, marking the end of my time as one of the Graduate Fellows in the Digital Humanities. Even though I still have about 5 weeks before I present my final project, I’m beginning to reflect on the process and experience so far, and I’m thinking critically about how to spend the rest of my time.

My project “Virtual Garden Dining in Pompeii” actually began in 2018 when I made the decision to create 3D models of the gardens I study in Pompeii, to document their evidence and to create an interactive record (of the gardens) that could be explored remotely. Not knowing how to do this, I was directed to the Digital Media Lab, where I met Arin Bennett and Will Rourk, who enthusiastically brainstormed with me about the various ways to capture my gardens. By the end of the conversation, it was clear that my best way forward was to document the gardens using photogrammetry, a technique that requires one to take a lot of photos that are then stitched together using MetaShape (formerly PhotoScan) to create a 3D model. They gave me the resources to learn how to do photogrammetry and some assignments to practice before I headed back to Italy for the summer to do fieldwork. While I was there, I documented three gardens, which make up the project today.

Fast forward to 2020: I was finally ready to do something with the spatial data I collected using photogrammetry and the 3D models that could be produced. Because of the pandemic, my collaborators (Arin and Will, but also Drew McQueen and Shayne Brandon of IATH) and I all worked together remotely. The Scholars’ Lab/Digital Media Lab provided me an Oculus Quest and I worked on getting some upgrades to my own equipment so that I could work in VR (virtual reality). Overall, it is remarkable what can be accomplished over Zoom and in the virtual workspace of the headset, and I find myself somewhat surprised by how effective and important the collaborative remote working time has been. Not only was I able to learn and understand and progress with the technology and my project, but the time with my team was a key factor in my ability to cope with everything that has gone on this year.

Once the models of the gardens and the GIS plan of Pompeii were uploaded into VR, Arin and I got busy reconstructing the ancient environment. First, each garden model was situated in its proper place on the map and the scale of both adjusted to reflect reality. Given our timeframe and resources, we decided to rebuild the features of each garden using existing tools in Neos. As a result, the masonry walls, tables, benches, and dining couches were all recreated or reconstructed using simple geometric shapes, to which we applied a texture. In addition to these simple shapes, we recreated some of the known greenery of the ancient gardens. For the most part, this involved repeatedly placing existing models of different types of foliage (also from Neos’ catalogue) over the pergula structures that once shaded the dining couches. Finally, we also incorporated individual 3D models of Roman roof tiles (imbrex and tegula tiles, downloaded from SketchFab) to recreate the roofline of the garden, and incorporated some archival images into the reconstruction to enhance certain details of the ancient garden space. Some of the reconstructed features are not perfectly realistic, but their overall effect still does the trick and helps me to answer certain questions and to better understand the totality of the garden dining spaces. 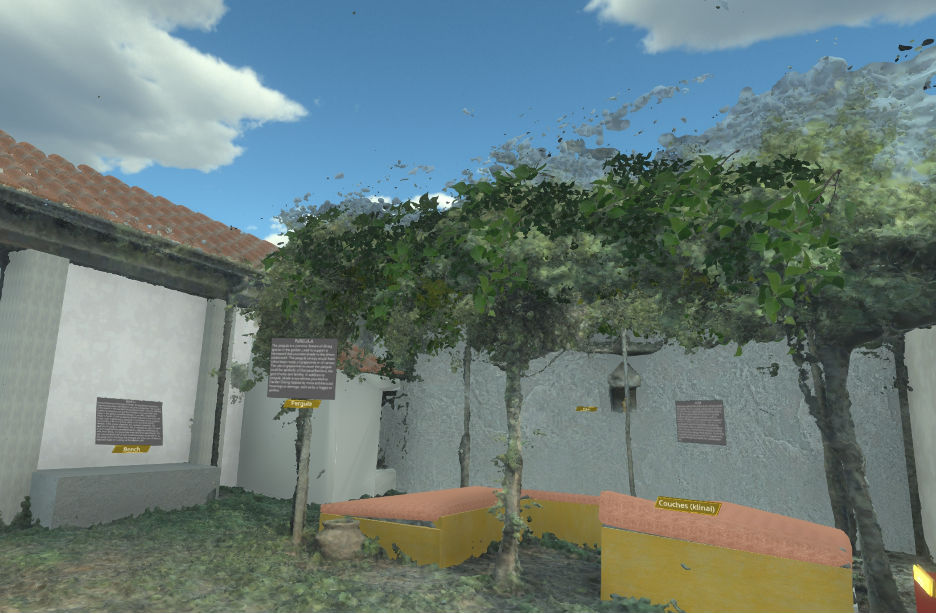 Reconstructing the ancient garden dining spaces to have as an interactive model for study was just one goal of the project, however. I ultimately wanted this work to be enjoyed by and benefit others, the public, students, and other scholars. I didn’t think that simply presenting a finished, reconstructed space would most benefit the intended audience, however. Ironically, reconstructed spaces felt a little divorced from reality, too clinical. I wanted to create and experience that felt more grounded in reality.

I opted to design an experience that allows visitors to build their experience and the layers of information of these ancient gardens. The experience starts with the visitor entering through the front door of the property. The whole plan of the property is extruded from the GIS map of the city to give people the general impression of the whole property. The garden is the only part of the property presented with any kind of detail. When the visitor arrives at the garden, they are presented with the photogrammetric model of the garden as it is today. Having this be their first experience of the space is deliberate. As I’ve mentioned previously, when I first entered my garden dining space models (derived from the spatial data captured using photogrammetry) in VR, I had quite a visceral and emotional experience. They weren’t perfect, but I felt as if I was there again. The light, in particular, felt right. There is something really special about the light in the Pompeii. I can’t explain it, but it’s not something that is easily captured by a regular old photograph (though Bill Wylie has captured the light beautifully – I cried when I saw his photographs for the first time, but his are no ordinary photographs). Somehow, though, my thousands of iPhone camera photographs, stitched together using photogrammetry, managed to reproduce very ephemeral aspects of reality, namely light and vegetation. Even if my experience and reaction to the spaces in VR draws also on my memories and experiences there on site, I imagine that others might have a similar experience and reaction, drawing from their own personal experiences and embodied knowledge of space. So, I want to give others the chance to experience this space as vividly as I do; and, by placing visitors first into something real (or derived from reality), I hope that experience will help to contextualize the layers of reconstruction they will build as they explore the garden.

Once the visitor is acclimated, they can begin building the reconstructed garden dining spaces. To do this, we decided to connect the reconstructed features of the spaces (layers of data) to virtual buttons (using a visual programming system built into NeosVR called Logix) that could be toggled on and off. In addition to the buttons that controlled the presence of the reconstructed features, there are also virtual buttons within the garden, each associated with a particular feature, that brings up a placard of information about the feature, its function, how it was in antiquity, and its significance in this garden context. Structuring the data in this way allows the viewer to move through the garden, explore each of the features, and build their understanding of the garden dining space and its significance to the ancient Pompeians.

The layering of information, spatial and textual, is completed with access to archival images of the garden in the model. These images, like the reconstructed features and placards of information, can be turned on and off. The archival images are placed throughout the garden, their position and orientation capturing the perspective of the photograph, allowing people to see the garden at various points during its excavation and subsequent history. These photographs contain valuable information about the features of the gardens and dining spaces, which tends to be lost with the passage of time (e.g., the painted details of wall paintings or small artifacts that are now housed in storage or museums).

With about a month left to go, there are still walls that need to be rebuilt, buttons that need to be Logixed, some additional structure to be considered, and sources to be cited. But the end of these next few weeks does not mark the end of this project. For starters, I need to find a permanent home for the project, and I might need to create a desktop version of the project so people without access to a VR headset can also enjoy the spaces (Neos is working on a Desktop version for their software, however, stay tuned). But more importantly, with the construction of these virtual garden dining spaces, I’ve learned to think more creatively and openly about their possible form and applications in the future.