At the onset of my field research in summer 2007, I launched a blog – YellowBuzz.org – with the intention to: 1) archive and organize my field notes in textual and audio-visual form; 2) convey my research purpose and progress to informant musicians and the public; 3) self-position as a “participant” in the scene. Since then, I have made over 160 posts, some directly linked and others tangentially related to my research findings about the activities and media of Asian American indie rock musicians. Over the past one and a half years, my field research blog has received attention from both print and online media.  Evidently, this blog has constructed a community consisting of musician- and music-enthusiast-visitors with an interest in Asian American and transpacific music-culture.

This past January, I began tracking the blog traffic by using Google Analytics. This service monitors the physical location of site visitors and their interactions with the pages on the site. The geographical data are analyzed in terms of the number of visits per unit of geographical organization such as city, country/territory, sub continent region, and continent.  This information is also visualized in the form of an interactive map on which users can zoom in and out of specific locales and find site visit patterns specific to cities, countries, regions, or continents in the world.

Over the last four months, I have been playing with the May Overlay function projecting geospatial patterns of the site traffic on my blog. These interactive moments have helped me imagine interesting questions such as: What is the geography of an electronic community based on the topic of “Asian American music,” the tagline of my blog? What does the geo-spatial terrain of this “digital diaspora” look like? Are there any striking patterns at each of the organizational level namely, the city, country, sub-continental region, and continent? What spatial boundaries are transcended and created in these visualizations? Or, fancifully, how does the digital geography of my blog reconfigure the more general social geography of “Asian America” online or offline?

Today marks a 4-month anniversary of this thought experiment. I decided to take some screen shots of a few of the visualizations that I’ve found more meaningful in Google Analytics. This analysis uses data from a sample of 3,061 site visits collected from January 1 to April 30, 2009. I will highlight a few interesting findings below: 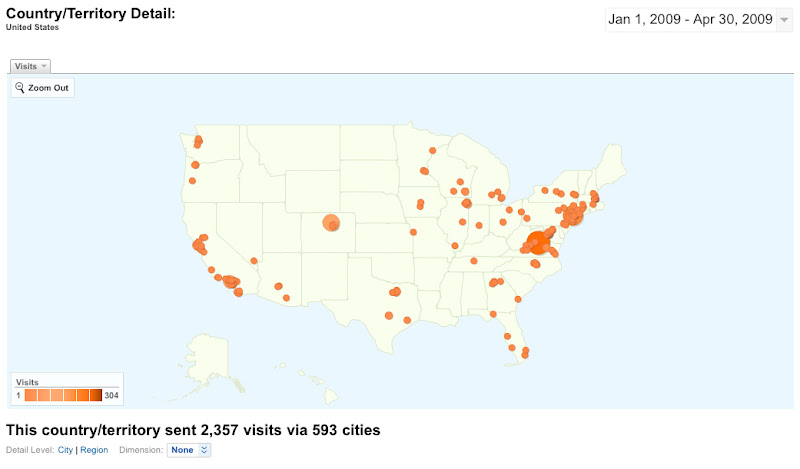 1) Here’s a map of blog visits in various U.S. cities. It appears that the visitors are concentrated in central Virginia (the home of yours truly), New York City, Boulder, Los Angeles, and San Francisco. Other than central Virginia and Boulder, these are areas of high concentration of Asian Americans and indie rock activities. I’m not quite sure how to explain the traffic flow from the Denver area (Boulder and Aurora, ranked sixth in this map) other than to link it to the thriving indie rock scene in Boulder and the physical location of an Asian/Japanese music blogger Shay of Sparkplugged. 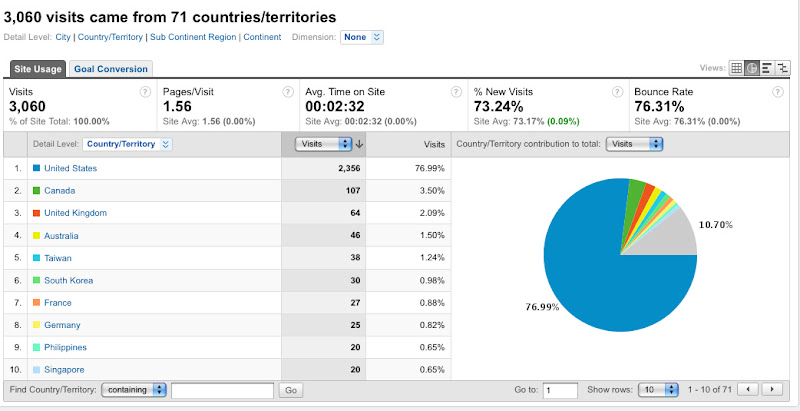 2) According to this chart, 76% of the site visits have occurred within the boundaries of the United States. Next on the list are Canada, United Kingdom, and Australia, all English-speaking countries with close historical ties to American music. In the continent of Asia, countries such as Taiwan, South Korea, the Philippines, and Singapore have among the highest number of visitors to my site. I attribute this pattern to my blog posts about U.S.-based artists who have a large following in these particular countries. Specifically, Hsu-nami (of New Jersey) and Johnny Hi-Fi (SF-based) has strong ties to Taiwan; Kite Operations (New-York) to South Korea; Plus/Minus (New York) to the Philippines and Taiwan.

3) This last chart represents the sub-continental spread of the site visits. North America takes the lead (taking 80% of all visits). Northern Europe and Eastern Asia tie as second, followed by South-Eastern Asian and Western Europe. I’m not quite sure how to explain the high number of visits from Northern Europe other than to link it to the popularity of a Taiwanese metal band Chthonic in North Europe. Chthonic has a strong international presence, having worked with producers in Denmark and the U.S. including Rob Caggiano, the guitarist of Anthrax. In 2007, Chthonic toured with the OzzFest and established close ties with Taiwanese-American-led erhu rock group Hsu-nami.

So what does this all mean? YellowBuzz, a blog on “Asian American music”, has constructed a global, transnational readership. Asian America in the online digital environment exists beyond the boundaries of the United States and the Asian continent. These observations of transnational crossings work against the geography of Orientalism: a now-classical theory within postcolonial studies that refers the representational control of the non-west by western-produced discourse.  The digital diaspora of YellowBuzz has tampered with the so-called east-west binary.

Now if I were serious about pursuing the research on the transnationality of Internet music journalism, I would look for a correlation between blog content and traffic patterns. This would require systematic, post-to-post observations. I would also consider mapping information regarding Internet access and user demographic with the intention to find links between the blog statistics and general Internet sociality. I would also look for statistical and mapping methods more powerful than Google Analytics.

But – to get back to my dissertation that asks: What paths do musicians and their music take as they establish routes crossing territories constructed by nation-states, corporations, international laws, etc? Unfortunately, these visualizations lack the analytical strength to provide an insight on the musicians’ perspective on the scene. They have offered a perspective on media, in particular in understanding the role of a music blog in constructing “Asian America.”

In the coming months, I will be working on a digital humanities project with Joe Gilbert at UVa’s Scholars’ Lab pursuing questions related to the musicians’ side of the story. I hope to unravel the terrain of musicians’ sociality within the transnational scene of indie rock music by mapping out their tours, social networks on (SNS), and record distribution. Meanwhile, I’m experiencing a bout of euphoria loving the fact that I have reclaimed a free market analytical tool offered by Google for my academic(-y) ethnomusicological thought experiment.