This post is the final in a series that contextualizes my current project, Digital Skriker, within a larger tradition of studying and archiving stage movement. My project explores both the theoretical cruxes and archival possibilities enabled by robust and increasingly accessible motion capture and virtual reality technologies using Caryl Churchill’s play, The Skriker (1994) as a case study. I’m interested not only in how these technologies might change the way we think about documenting stage movement and gesture, but also how they may be used to create modes of (posthuman?) performance.

It’s hard to overstate the coolness of choreographer Bill Forsythe’s Synchronous Objects, a collaborative project with the Advanced Computer Center for the Arts and Design at Ohio State University. The project creates a variety of visualizations—scores, maps, graphics, animations—that reproduce in various ways Forsythe’s dynamic piece One Flat Thing. Forsythe sees choreography as “an organization practice that employs fundamental creative strategies relevant to many other domains” and researchers believe that the visual objects they create enable users to quickly grasp the ideas in the choreography and encourage new interpretations of the dance. In effect, finding new visualizations for visual movement enable new forms of meaning. 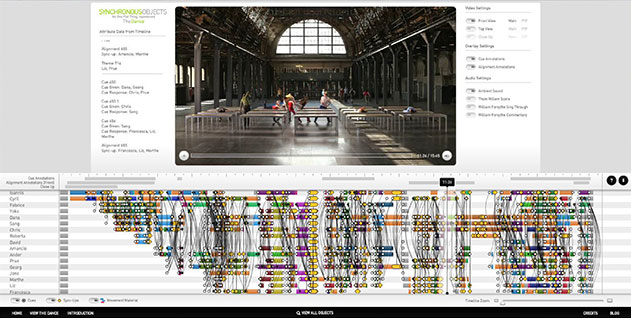 This project was highly influential to my earliest thinking on what has now become Digital Skriker. I was intrigued by how Forsythe and the research team chose to transform the movement into a readable score and indicate the ways that certain dancers’ movement cues certain others—processes and language familiar to both music and stagecraft. What if every Forsythe piece had an accompanying score? Would access to those visualizations change the ways we characterized his choreographic style? Would he become known for certain movement chords? Does the data we gain from these visualizations give us any more purchase on Forsythe’s style than our expert observation? (I’m not so sure…)

In my observation, digital projects that engage with movement can be said to loosely engage one or more of the following aims: documenting, interpreting, and creating. As one might image, there’s significant overlap between these three categories (as documenting often involves some sort of interpretation and creating also relies on knowledge of past practices, etc.). Motion Bank creates an archive of dancers’ movements to serve as choreographic resources for other creators. As in Synchronous Objects, movement data is processed into beautiful digital renderings. Other notable projects that I’ve run into include the 2009-2010 Inside Movement Knowledge which aimed to develop an installation, documentation method, and prototype course book to enhance dance studies in higher education and The Digital Intermedia Collaborative Platform at Berkeley , which allows for collaborative investigation of movement and bodily expression.

But of course, records of movement can exist elsewhere besides the digital space. I’ve greatly benefited from the experience of my colleague Barry Houlihan, archivist and drama specialist at NUI Galway, who I have spoken with about how one might guide researchers using collections like the Abbey Theatre Archives to recreate performances with prompt scripts when video records are absent. Archival materials like prompt books and stage manager notes are vital resources for those of us interested in the blocking of significant historical performances. (The Dance Heritage Coalition also offers this guide that seems relevant for those interested in theatre archives, too.)

Other technologies, like the Simulated Environment for Theatre (SET) project, enable users to either translate the movement data they gather from analog sources or create their own blocking into visualizations. This kind of work is immensely helpful, particularly, I suspect, for drama students who may not always be used to thinking about who’s on stage at a given moment—a line dramatically changes in delivery, for example, if it’s said with no one on stage, or in the midst of a crowd. Projects like SET blur the line between documentation and creation, offering possibilities for both, much like the motion capture technology that I’m also engaging in Digital Skriker.

Motion capture data, in its rawest form, is a pretty stable form of information about movement. Though it can be mapped onto avatars for a variety of visualizations, the core of the data is just coordinates tracing the change in position over time of various limbs. If I printed out the mocap data, I could lose access to all of my fancy visualization products and still be able to draw some kind of conclusion about the movement represented—how fast or slow are movement changes occurring? How fluid or angular are the transformations? It’s a solid form of documentation.

However, because mocap plays well with a variety of animators, theatre practitioners have also started using it to experiment with live performance. Recently the Royal Shakespeare Company partnered with Intel and Imaginarium (a production company co-founded by Andy Serkis) to stage a production of The Tempest featuring a partially digitally-rendered Ariel played by Mark Quartley, who embodied all of the character’s turns towards magic with the help of what one reviewer called “digital wizardry”. The production marked an innovative research collaboration between industry and artists at a scale and requiring an amount of resources inaccessible to most theatre companies. However, the RSC’s commitment to preserving what Julie Taymor has called the “double event”—the co-presence of actor and avatar—strikes me as a model for using technology in performance that preserves the status of the human actor and live human interaction which is central to our conceptions of the theatrical experience. I love this model for incorporating technology into performance, though my work in Digital Skriker imagines another possibility by experimenting with pre-recorded motion as an element of live performance.

Like SET or Motion Bank, my work plays with both documentation and creation, though, I’m increasingly interested in the latter. The avatar I have rigged with my actor’s movement is a layered documentation of both my directing and the mover’s creativity. The final avatar is a combination of that creative collaboration, my (limited) technical prowess, and the computing power of Unity. So yes, in some ways motion capture does enable a certain kind of record to be kept about a mover’s performance—but even that record does not exist in a vacuum. The resulting animation is from its’ earliest steps, co-created between both the humans involved and technological actors—leading us perhaps on a form of posthuman performance. More on that later.