My kids love listening to stories and music. All the time. Especially as they go to sleep each night. Over the many years, there have been many different products we have used to play nighttime music and stories. I don’t know how many CD/tape players we’ve gone through. Tapes are great, but they degrade over time. CD’s are better, but they get scratched and glitch, too. Just this morning when I turned off the CD player, it was glitching on a track and had been doing that all night long. It’s time to upgrade to the future. 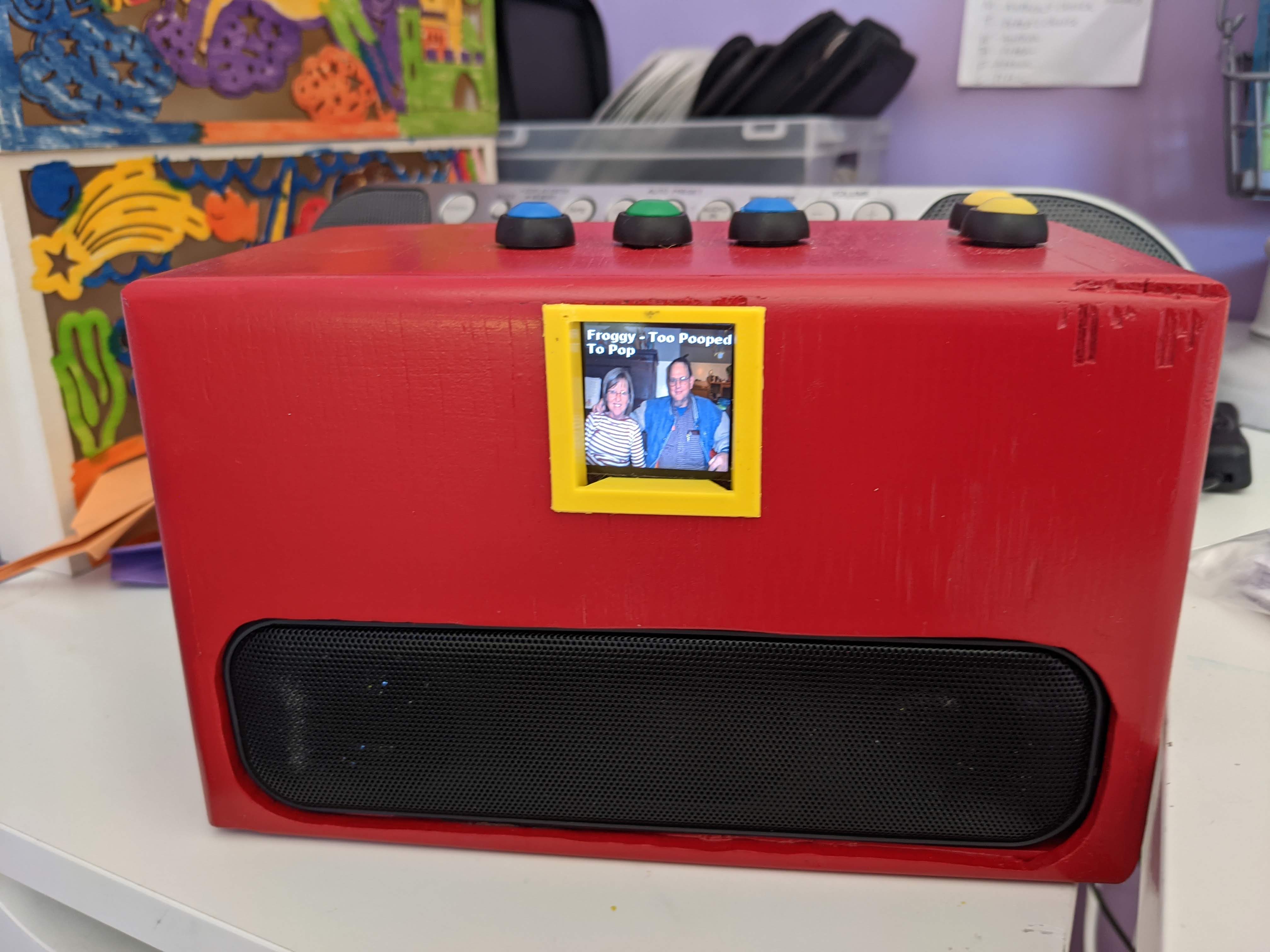 As with most projects nowadays, if you can think it up, someone has probably thought of it too, finished the project, posted it online, and it looks better than I could have done. But it’s worth a try to make one anyway!

Many other people have created software and hardware solutions for creating an easy to use, modern media player. I was tempted to write the software all on my own, but I wanted to finish this project this year. :)

Here are some of the options I found:

Here are the parts I used to make this project:

I played around with the idea of using a potentiometer to control the volume. I purchased some and even 3D printed a larger wheel. But I purchased the wrong type, and I didn’t want to figure out how to make mine work. I went the easy route and used buttons. You can see the failed attempt in the picture below with all of the wires coming off of it.

I also experimented with a holder for the RFID card. In the end I just used double sided tape to hold it in place. 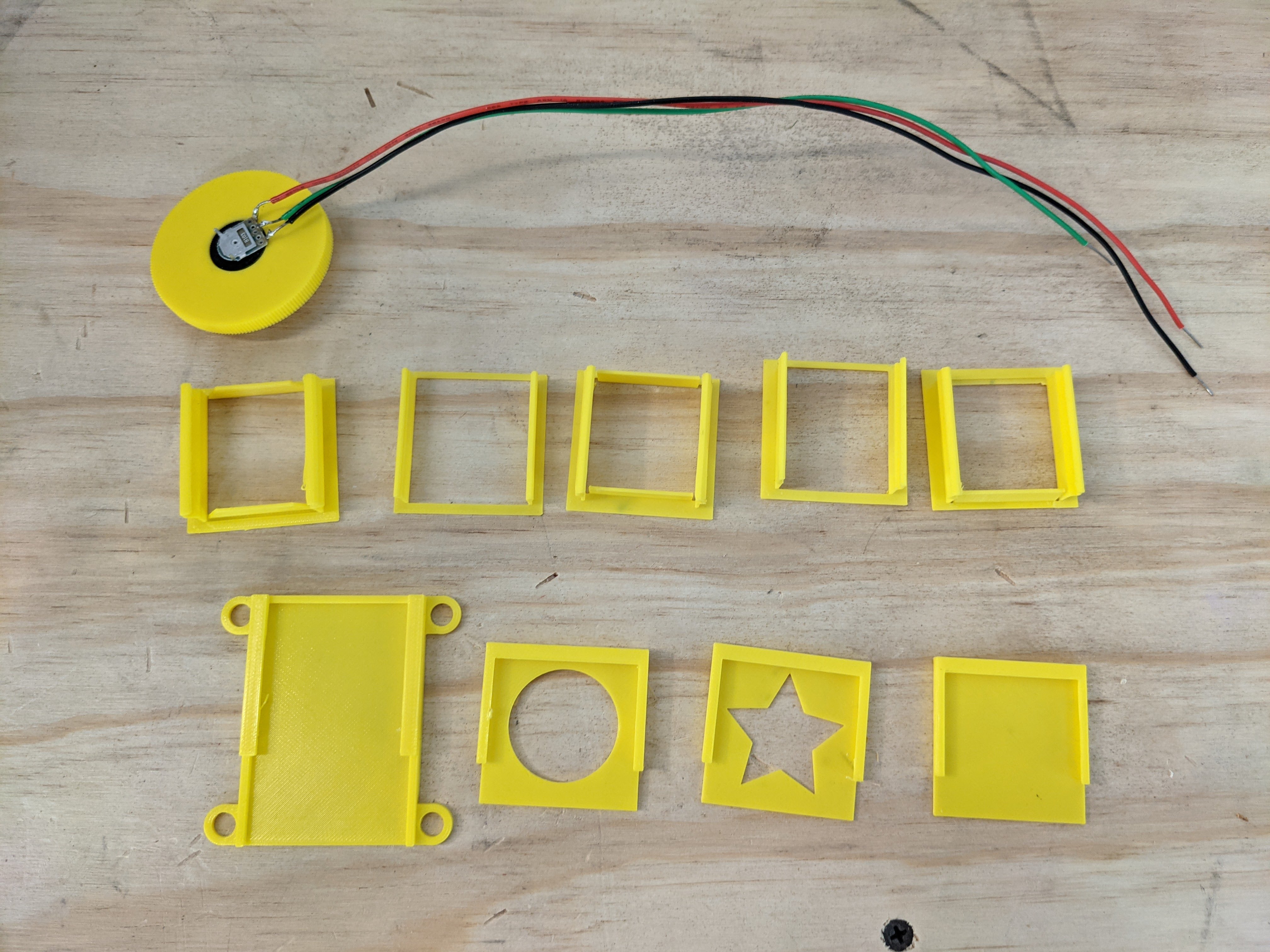 I also designed and 3D printed an LCD screen holder. This fit inside the square hole, and held the LCD in place. 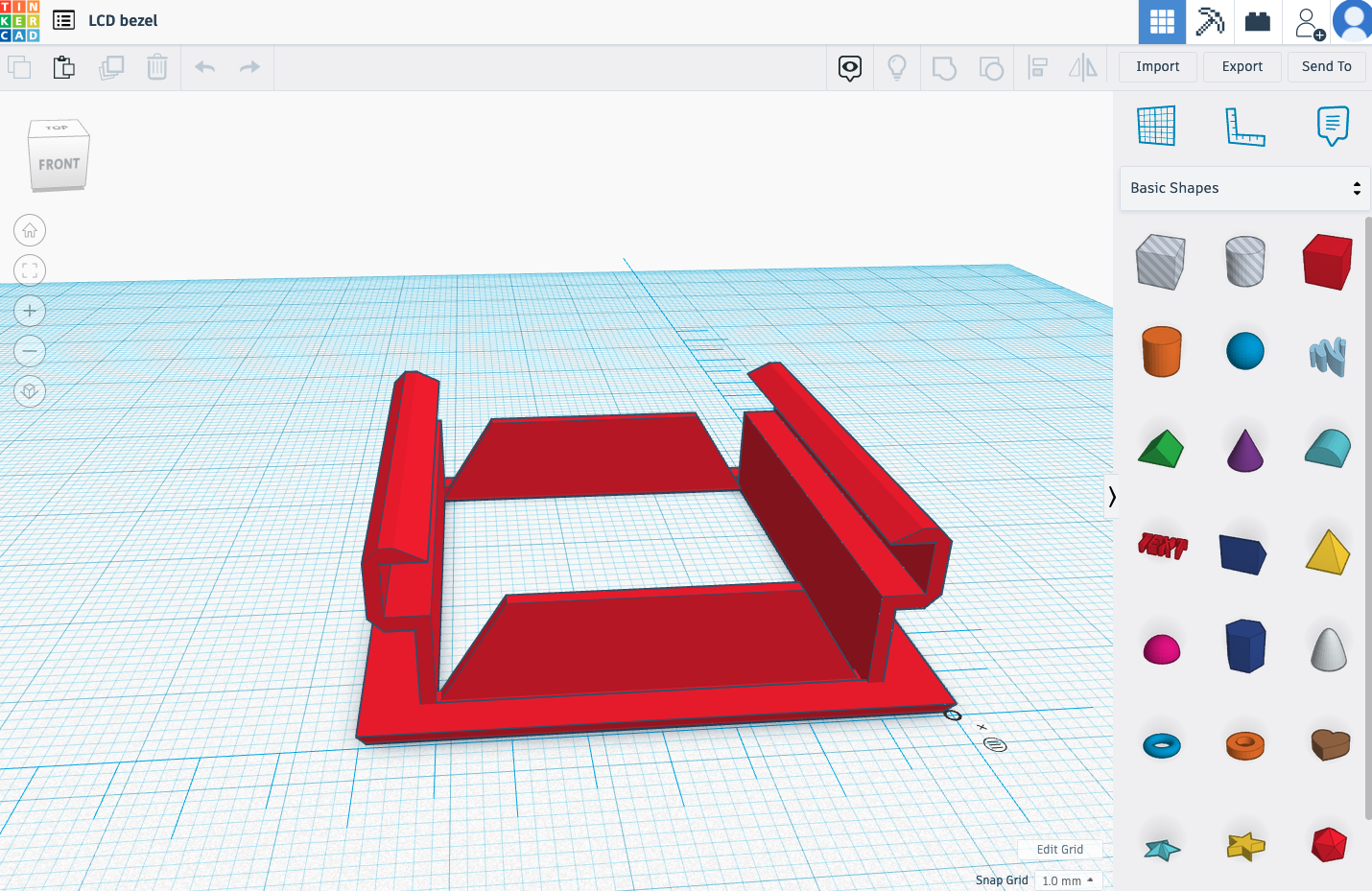 I used the most recent version of Raspbian OS.

The LCD display needed some custom software. I was hoping the display was more like an HDMI out that displayed the desktop natively. But it’s more like a picture frame. You send an image to it, and it displays the image. You can replicate animation by sending lots of images to the display in quick succession. (Yes, the very definition of animation.) But this must be done programmatically, like using a for loop to loop through iterations of an image.

I used Python and the ST7789 library to control the 1.54” PiMoroni SPI display.

I forked the Phoniebox/Jukebox project in order to add the LCD code. The main code for the LCD is in this repo https://github.com/ammonshepherd/RPi-Jukebox-RFID/blob/lcd/components/displays/SPI_ST7789/now_playing.py

This also requires adding a line to the bottom of the startup script to start the LCD script.

This causes the Python script to run continuously.

The now_playing.py script (linked above) is pretty basic. It attempts to use the files and scripts already present in the Phoniebox application, and utilizes the built in API for getting the current playing media file.

It takes the name of the file and the author, grabs the album image if there is one, then creates an image from these things and displays it to the LCD. It’s a simple static image that changes a couple of seconds after a media file is played.

To keep track of where to plug things in, I used the wonderful Fritzing software. Here is the wiring schematic. 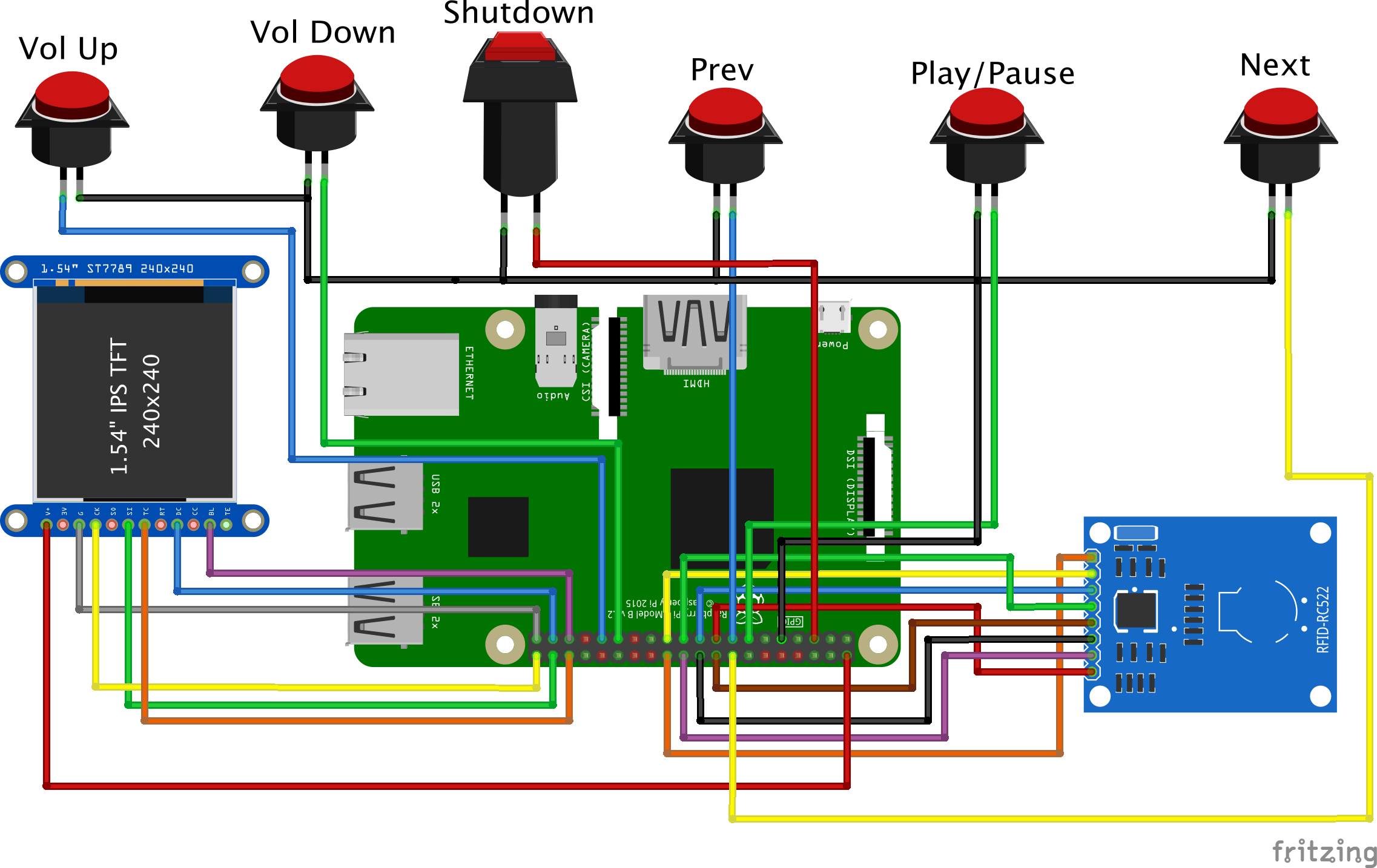 With an RFID card reader, LCD, and six buttons, nearly every port is used on the Raspberry Pi. 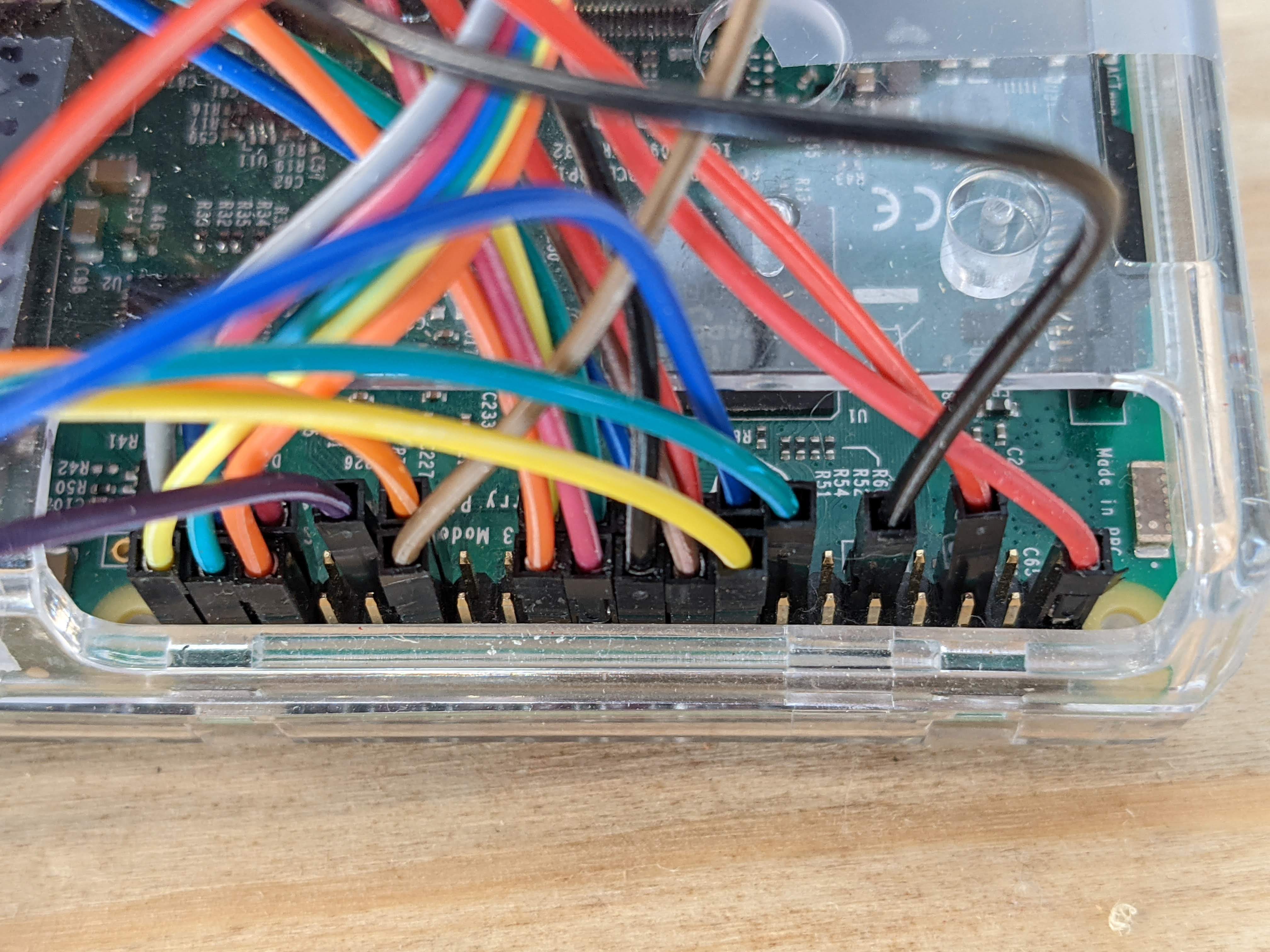 This did require some alterations of the boot config, in order to turn the GPIO pins used by the LCD into SPI pins.

This was the first thing to plug in and test. I used the default wiring suggested by the Phoniebox install instructions. Everything worked pretty smoothly.

To get this LCD to work on SPI 1 (since SPI 0 is used by the RFID reader), I had to edit the /boot/config.txt file and add the following line.

The documentation from Pimoroni gives the GPIO pins to use, but I needed to adjust those since many were taken by the RFID card.

I used some mini arcade looking buttons for the control buttons. Just a simple play/pause, next, previous, and volume up and down.

I also used a small momentary button to act as a shutdown button. specs and install

I had many options here; 3D printed case, mahogany wood, cardboard, plywood, pine. I started off thinking I would make a demo case out of plywood. So I quickly constructed a simple box to hold the components. It was an exercise in learning how to cut straight lines freehand with improper tools. The first iteration was a rough approximation of a box. I took no pictures.

The second iteration was also going to be a prototype in plywood, but it ended up taking longer than expected, and I wanted to finish the project, so I opted for done is better than perfect. That is why you’ll see a big gouge on the top right of the front. It turns out that cheap plywood doesn’t work so well on a router. The main box is all just glued together, then spray painted and sealed. 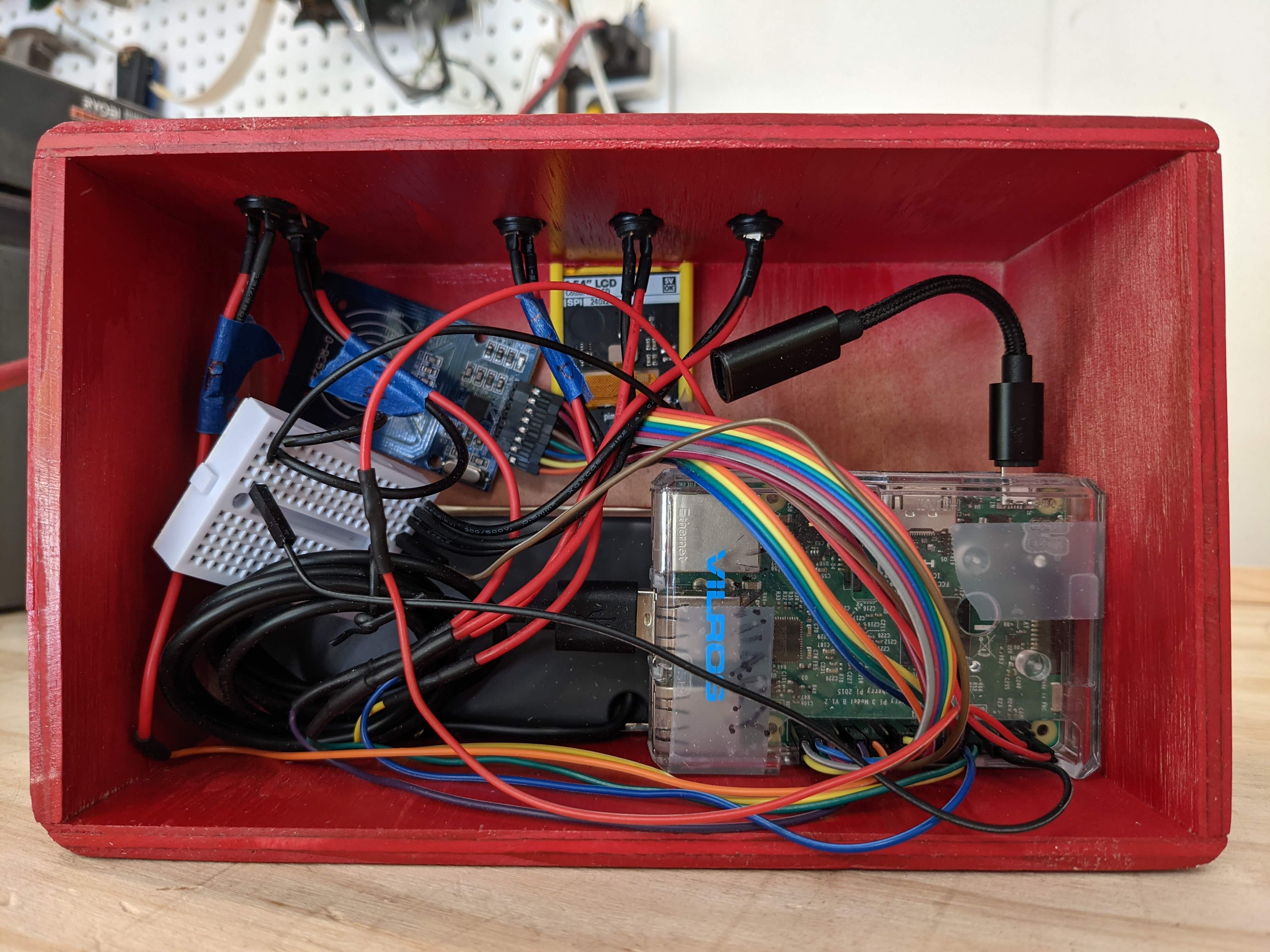 The back of the box is a piece of plywood with strips of wood glued on the back to make a snug fit within the main box to make a pretty secure pressure fitting. 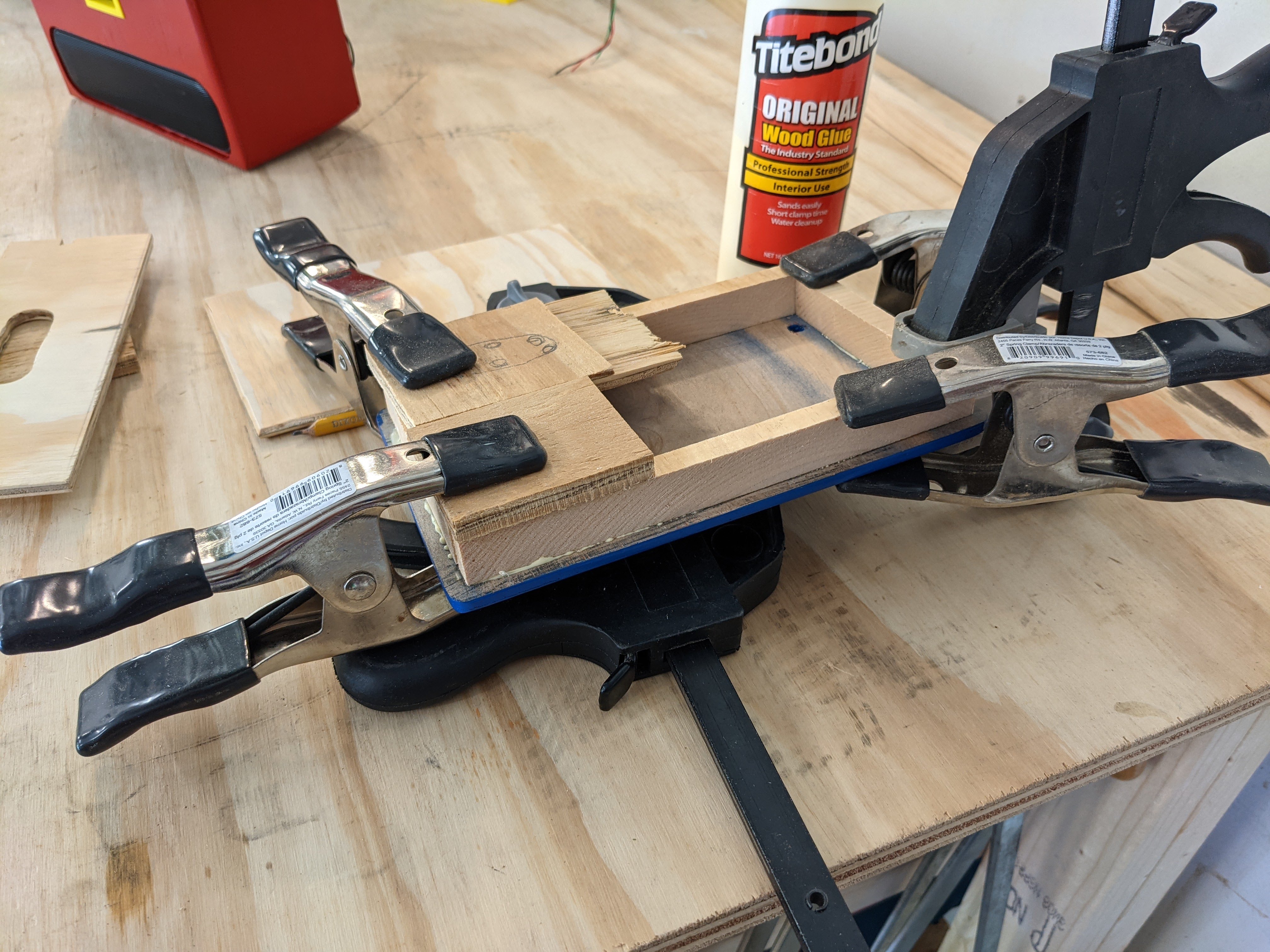 The back has two holes; one for the shutdown switch, and the other for the power adapter connection. 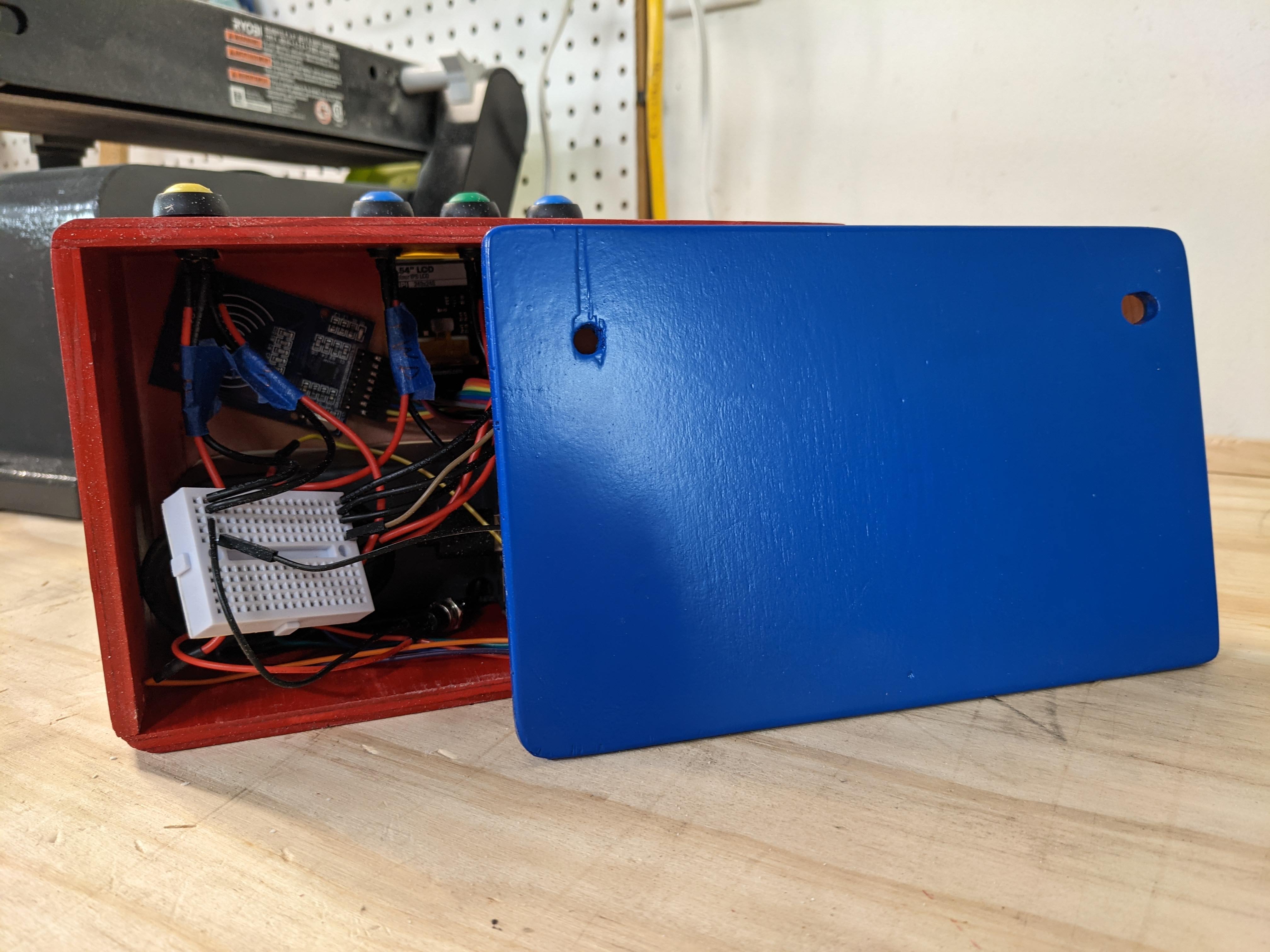 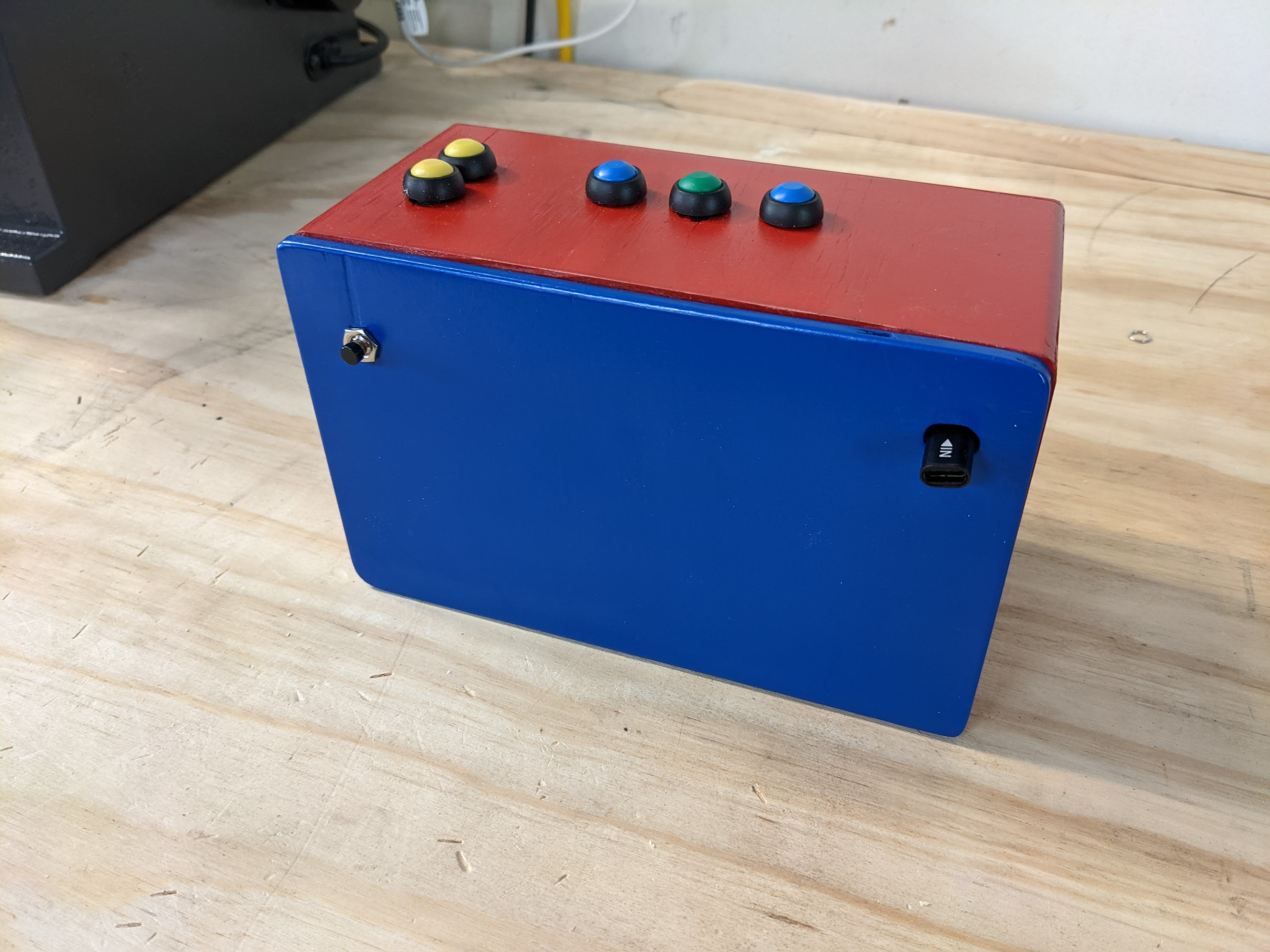 The USB speaker fits snuggly in the cutout in the front, and is secured with some thick double sided tape. 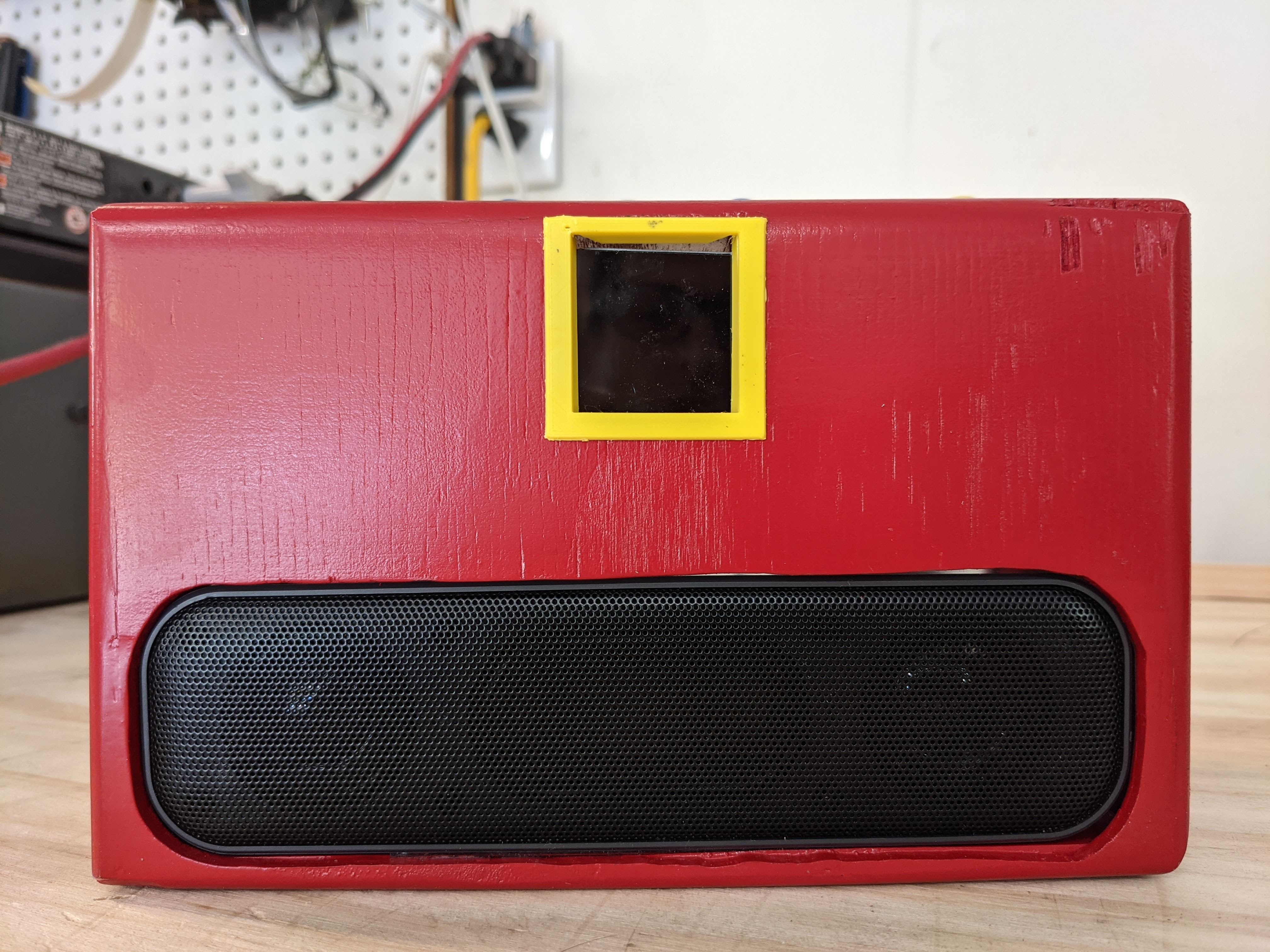 The LCD holder fits in the hole, and the LCD slides into the slots in the holder, also forming a pressure fit. 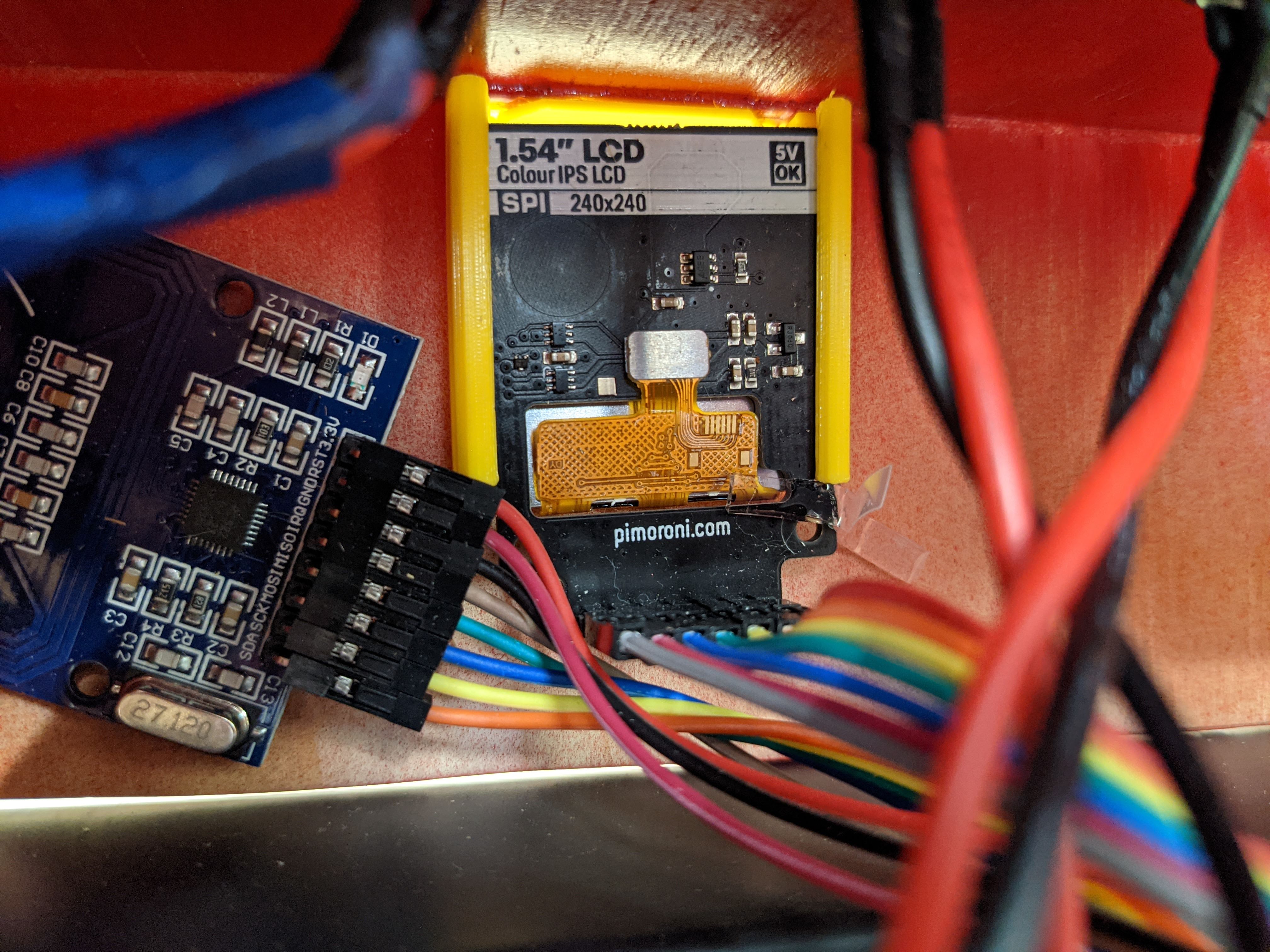 I initially thought to 3D print a holder for the RFID card reader. But initial prototypes showed that things were fitting in a bit too snug. So it ended up being easiest to just mount the RFID card reader to the inside of the case with double sided tape. 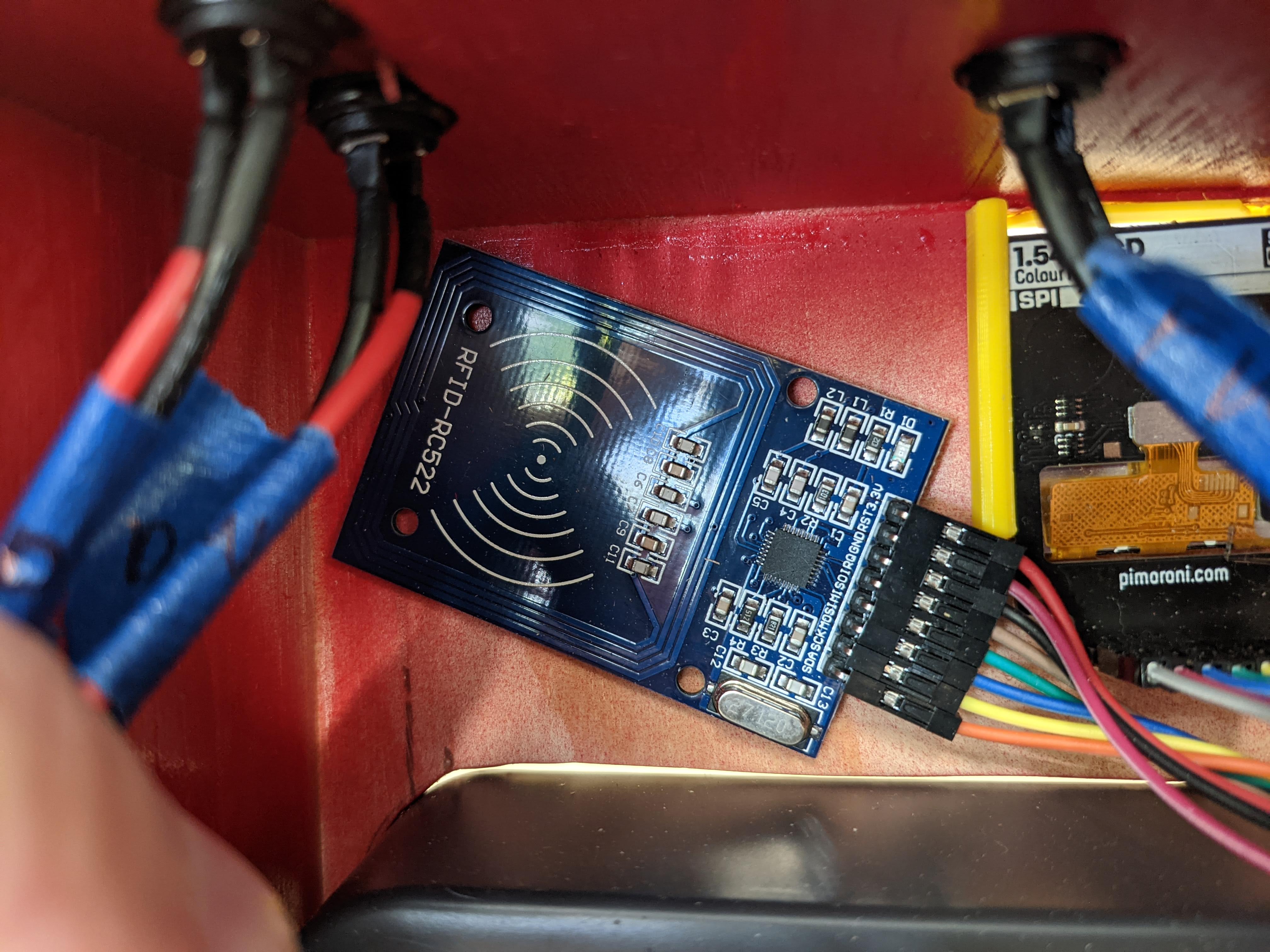 Three buttons for media playback, and two for volume.

This was a fun project to do. It incorporated a lot of my interests, coding, electronics, wood working. I’m not that great at any of them, but this was a good project to work on those things.

If I work on this further, I’ll fix the code to turn off the LCD when the Pi is shutdown. Currently the LCD remains powered on until power is cut to the Pi. If I had to do this over again, I’d just use a small HDMI screen instead, and have the Pi boot up the default web app.

I prefer different buttons, but these were the cheapest/best I could find for now. I’d like to look into creating my own buttons that have symbols on the top.

I would also use a USB RFID reader. Much more simple. The Phoniebox project even suggests this, as they try to be USB plug and play.

Here’s a short video of the player in action.

If you have any questions or comments, feel free to reach out to me directly at ammon@virginia.edu